When I went to Peru in 2007 to study Chancay Gauzes at Museo Amano, one of my friends, who had been in Peru 20 years ago, told me to look for dolls at markets.

Many of the weavers in Peru buy antique textile and then they cut it into small pieces and make dolls out of them, selling to the tourists. My friend told me that she thought there was Gauze textile on the head of the dolls, and she was right.

I was able to buy two dolls. On one of them there was a very simple Gauze textile on the head. On the second there was a more complex Gauze technique. Today I am a happy owner of two small pieces of Chancay Gauzes. I chose to cut the dolls apart and have had the textiles framed.

I think it's completely crazy that the weavers make dolls out of the antique textiles, eventhough it's a way of making a living for them. At the markets there are many dolls, but not a lot of them you can find today have Gauze on the head, so I have been very lucky. I also walked around with my magnifier all the time.

The following dolls belongs to my friend. 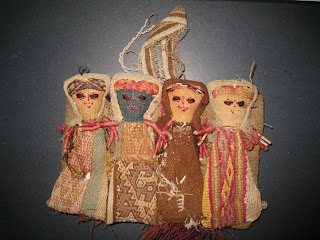 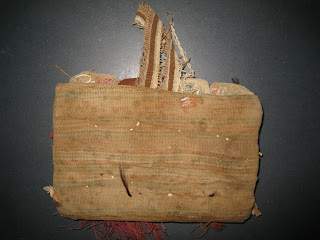 The following text in " " is from a little book written by M. K. Hodnett: Pre-Columbian Dolls in the Amano Museum.


"The Pre-Columbian Chancay culture developed on the coastal valley north of Lima, Peru. Their ceramics, textiles, and other artifacts exhibit definite characteristics. Of these, the objects which attract the most attention are the "dolls" exclusive to the Chancay, whose presence next to funerary bundles remains a mystery.
Dolls made of fabrics such as these could have been preserved only under very special conditions. Fortunately, the central coast of Peru has an unusual climate, where a great deal of other fragile textile material has survived. This area is a dessert cut by a rives originating in the Andes. Burial in these dry sands was like placing items in safety deposit boxes to be covered by later generations." 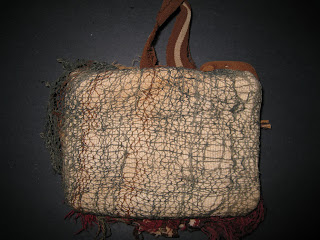 A beautiful piece of simple Gauze on the back. 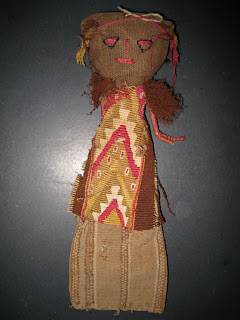 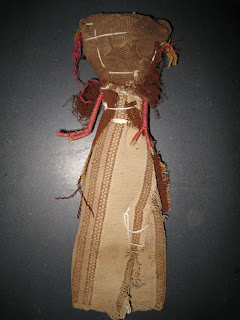 "While the poor were wrapped in plain cloth and deposited in shallow graves with only a few objects, the most sumptuous tombs were two or three meters in depth with well-finished walls of clay. These had cane roofs supported by vertical poles and horizontal wooden beams, and occasionally, even a stairway leading down from the surface. Such tombs contained an abundance of funerary offering such as ceramic pieces, textiles, silver, and sometimes dolls." 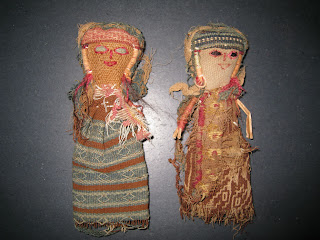 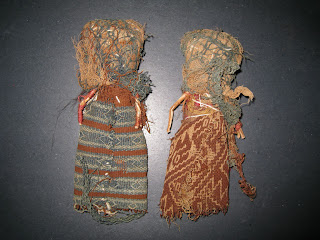