In November 2007 I went to Peru to study textiles. The purpose of the trip was to study the Chancay Gauzes at Museo Amano, located in Lima.

Besides these textiles I also wanted to go to Cusco, as many textile people I have had contact with through the internet have suggested me to contact Nilada Callanaupa Alvarez, who is living in Cusco. 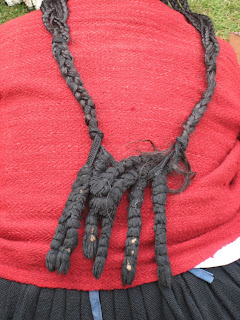 Nilda estableshed the Center for Traditional Textiles of Cusco in 1996. CTTC is working with 9 small villages located around Cusco, where the weaving is being madeon backstrap looms. I was able to go and visit Chinchero and Pitumarca.
These 9 villages have each own features, in patterns, colors and designs. Everything is made in natural materials and dying methods. Nilda is originally from Chinchero and have woven since she was little. She simple learn by watching.

CTTC has been established to keep the pre-colombian crafts alive, to encourage youth to weave and knit, so their amazing craft are not going into oblivion. It has also been important to promote their work and to achieve a house / assembly of arts and crafts where they can meet to work.
It is like so many other small communities only the eldery who have maintained these skills, so it is clearly one of CTTC's big goals to get youth started and it has succeeded.

Chinchero is according to the Incas: "Birthplace of the rainbow."
It's a community of female weavers where textiles is made on the backstrap loom. The children weave narrow "jakimas", which is hat bands. 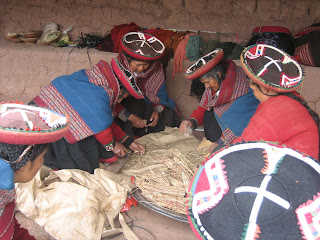 The clothing is different from community to community and can be as occupier of course recognize each other clothing, and again at the little details in each community.

I have bought a book Nilda have wrote, where the local is quoted. Initially, they were often ashamed to take into Cusco, for they were laughed by the city-dwellers, but today they are proud. One reason for this is the large influence of tourists, textile interests as me and other visitors who admire their skills, the whole way of live. The book gives an icredible exiting insight into traditions, culture and crafts. 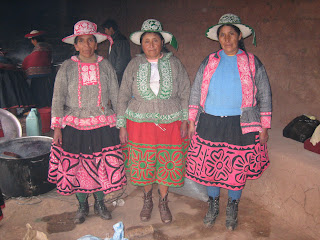 Chumbivilcas is a community located 249 km from Cusco.
There clothing is very special. From the "pollera" skirt and to the "kurpino" jackets.
These 3 women are from Chumbivilcas. They came all the way to Chinchero to take part in the dying day. They became my favorite, always smiling and extremly hardworking. Finally I took several pictures of them, which I subsequently sent to Nilda so she could pass them on.
What I thought was amazing was all the wool, each woman had spun, and which they could recognize, unbelievable. They recognize it in the way it was spun and there were never quarrels, they always found their own right yarn.
Here my favorite from Chumbivilcas hang up yarn and in here bare feet. Remember this yarn have just been at boiling point. She is so sweet. 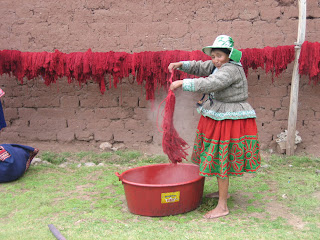 We were told there would be others to come and have a look and therefore Nilda had arrange a show. Actually only two more came, but it was interesting to see.
The show consist of the entire Chinchero society suddenly had laid out all their beautiful work under the new lean and had started to weave and prepare new warps. Unfortunately it started raining and they moved inside the new house, which was completed earlier this year. 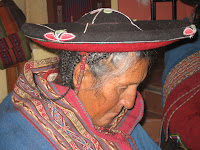 This old woman became my favorite and today I have regret I didn't bought anything from her, but I was and still is more interested in old. antique textiles.
In another message I will show some of the textiles I have bought from my trips. 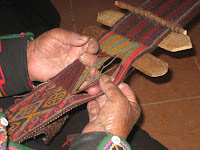 Pitumarca lies in the Ausangate region, south of Cusco. Here textiles are made in alpaca and sheep wool.
They are famous for the technique TICLLA -two weavers seated facing each other weaving at linking, so they meet in the middle of the fabric.
Since 2001 they have produced textiles equal from the Paracas and Nazca people.
Pitumarca society sonsists of four small communities, as reflected in the women's "manta".
Here there are both male and female weavers. 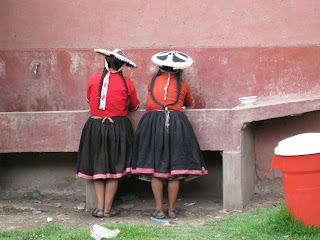 We had rented a taxi for a day and I thought often that we never reached.
When we arrived there, I was the only white, but everyone was so friendly. The actual leader was not there, so Freddy deceided he would go out and make me some friends. The first we were lucky enough to get in touch with was a woman who sat and sewed dolls of old antique textiles. I was fortunately to rescue a "golon" -woven border for the skirt and bought it for 20 soles. The leader later told me it was 70 years old. 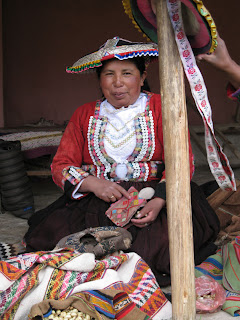 As unmarried, both women and men make more out of their clothing in the form of colors, assembling etc. Naturally, in order to attract the attention of the opposite sex.
This remarkable young man, I could not help but smile a little. He was completly dressed in synthetic colors, but sat and wove the finest textile in natural alpaca colors. 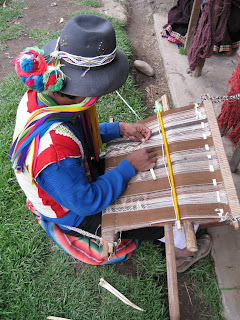 A meeting was taking place during the day, and as my husband didn't understand Quechua (he speaks spanish, eventhough he lived in Lima), we went out for a walk. We meet a woman who wanted to show us around. In the end of our trip she asked my husband if I didn't wanted to see what she was knitting. She was making "chullos" -hats. Freddy told me just to buy one and this time not to bargain as she was poor.
I had admired her "pollera" -skirt, while walking and said I were more interested in buying it.
We succeeded after a lot of giggling and of course we ended up bargaining, as I didn't had much money left as I had to pay the taxi in the end of the day.
We bought the skirt for 80 soles amd when she took it of, she was wearing another one underneath. So sweet. 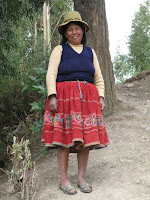