In November 2007 I went to Peru to study Chancay Gauzes at Museo Amano, located in Lima.
I was so lucky after taking contact to Amano, to be invited to the museum. I spent two weeks at the museum and each day I fall a little bit more in love with the textiles. Each day I was sitting and analyzing the Chancay Gauzes, drawing and taking pictures of them.

This trip has only been possible, because I in May 07 received a 3-year working grant from the Danish Art Foundation. 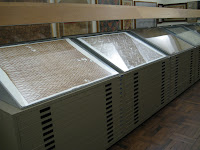 The Chancay Culture lived between 1100-1450 AC. It was a culture which were only located in a very little area, at the coast north from Lima. At Amano I was able to take a picture of a hand drawn map of the Chancay Valley, which included many small villages, such as Ancon, Pisquillo, Supe etc. 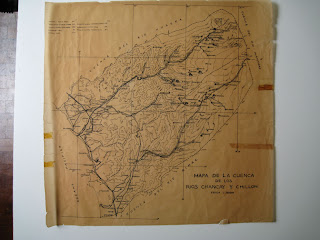 On my third trip to Peru I was able to visit Pisquillo, which is the last existing place in the Chancay Valley today. In 5-10 years it will probably disappear, like all the other villages.
The whole area is an archeological place, a dessert.

I remember I was a bit disappointed when seeing it, because we (two from Amano and I) where the only people there. Also there were no fencing and it didn't seemed like it has been taking care of by the Peruvian Government. For me that was surprising and sad, as I think this is a very important culture in the Peruvian history. 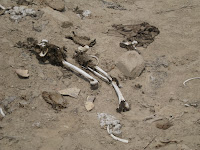 I wanted to go there to feel the atmosphere and breathe in where these amazing textiles have been made, for so many years ago.

In the sand bones, broken pottery and textiles where still lying, again I was surprised.
I asked if it is possible to find any good pieces today. When they came there in the beginning of the sixties, they were digging around 5-6 meters down, so if beeing lucky today to find good pieces, we should probably dig around 10 meters. 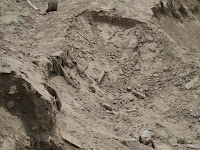 Amano have the biggest collection of the Chancay Gauzes in the world. It is also possible to find pieces at other museums, but Amano has the best.

The Gauzes are mainly made in cotton, but some is also made in wool, not many. At Amano I only saw one piece out of the 35 I was studying, a combination of cotton and wool. This piece was also in different kinds of colors, which is also not seen much.
They are all woven on a backstrap loom. Another thing which is characteristic for the Chancay Gauzes is they are all made in over twisted yarn. Over twisted is when a yarn has more twist than normal. You can see this when holding the yarn straight between two fingers and then relaxing it a bit. Then the yarn starts to curl together.

The textiles have all been finger manipulated when woven. 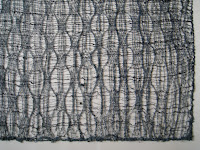 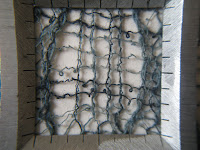 I took pictures of the same textiles in many ways. The first where it was possible to see the whole pattern and also of there broken parts. Here I always put a liner to measure the fabric. The last pictures was always taken through a magnifying, so I later when I have returned home, could re-analyze it.
The textile below is interesting in many ways. Made in over twisted cotton on the backstrap loom, but this piece has an extra dimension with the extra pattern that comes, when being dyed after weaving. It's so beautiful and one of my many favorites. 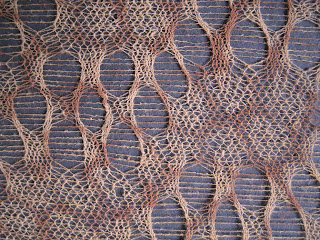 When travelling around in Peru, and if you like going to the market, for exampel in Pisac or even at the ones in Lima, you can be lucky to find small dolls. These dolls are made out of old textiles, often antique textiles.
I have been lucky to find two dolls where on the head there were Chancay Gauze. Today I have split them apart and have had the Gauze textile framed.
I have not been able to find many books about Gauzes from Peru, only small passages in several books, but there is some that I will recommend if interested.
I think it's a thesis of a master degree from the California Unniversity from 1948.
Lila M O'Neale: Textiles periods in ancient Peru III: The gauze weaves.
O'Neale was a famous anthropologist and has writing many books on textiles from Peru and Latin America.
Another book recommending is also from an anthropologist; Irene Emery. Sha has writing a book which everybody is referring to when analyzing textiles. I have seen several articles where the author is quoting her analyzes.
Irene Emery: The Primary Structures of Fabrics: An Illustrated Classification.
Another place to find articles about almost any weaving technique is the Ralph Griswold's database on the internet. This one I have used a lot.
Indsendt af karina nielsen rios, copenhagen, denmark