In 2009 I went to Japan to study Mojiri-ori, known in Europa as Leno or Gauze.

I have in an earlier post wrote about mojiri-ori in Japan. Please take a look for more detailed explanation about history and technique.

Takeshi KITAMURA weave the complex Gauze called Ra and he does it in his own very special way, like no one else. 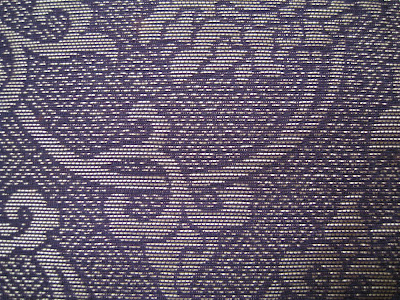 At the Crafts Gallery Collection in The National Museum of Modern Art in Tokyo I was fortunate to meet the curator Yoko Imai. Reiko Sudo, the owner of NUNO were so kind and introduce me to her. She showed me the work of Living National Treasure; Heiro KITAGAWA.

The above textile is woven in Ra-Kin. 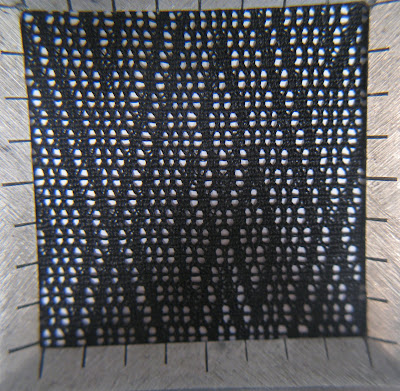 Another beautiful piece by Heiro KITAGAWA.
All the mojiri-ori textiles I have seen in Japan is woven in silk. All of them for kimono or obi. 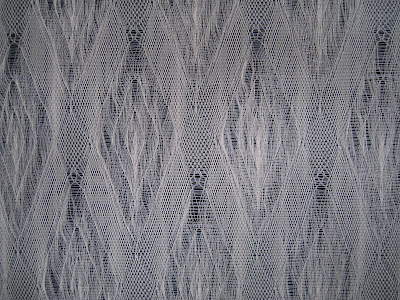 I were so lucky to be able to visit Takeshi KITAMURA in his studio in the Nishijin area in Kyoto.
The above textile is amazing. Woven in very fine silk on a jacquard loom.
When KITAMURA was awarded the Living National Treasure title he gave the government this textile as a gift.
I myself had of course also gifts with me. Often I bring some white and blue porcelain from the Royal Copenhagen with me.
I also gave KITAMURA one of my own designs I had woven in Gauze. Mine was in stainless steel. After receiving my gift he went out of the room and came in with a little frame. Inside it there were a sample of this fantastic textile and he gave it to ME. So now I have a little piece of KITAMURA's weaving spirit in my home. I feel so lucky. 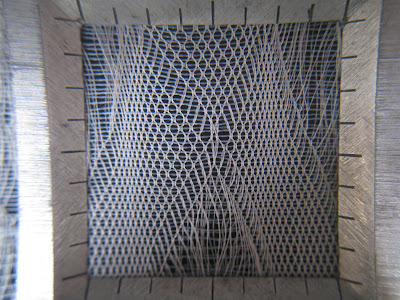 Detail photographed through a magnifying glass. 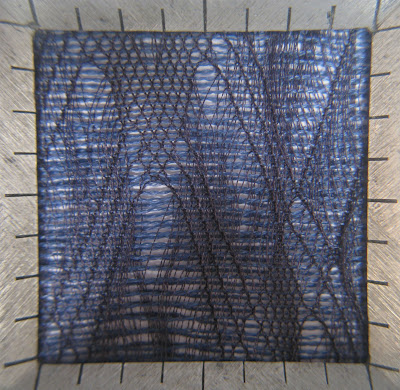 When KITAMURA was awarded the Living National Treasure title, the japanese government asked him to teached the Ra technique to other weavers in Japan. Ra is a technique that only a few knows of and this is why the japanese government does not want it to be forgotten.
He choose several weavers which represented the different kinds of regions in Japan. They all gathered at his studio once a month for two years. The group was called: The Usuhata Group. In 2005 the group had an exhibition at Daiwa Foundation Japan House in London; The Wings of the Cicada. 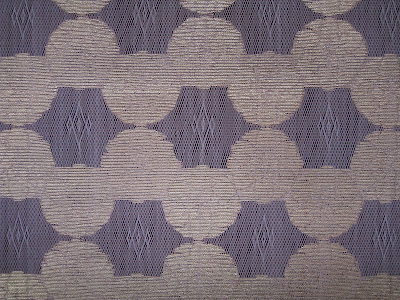 There are different meanings of where Gauze come from. Some say China and others Peru.
One thing is sure, in Japan there is influence from both countries, depending on how the artist work with the Gauze weaving.
KITAMURA told me that there are another weaver in Japan also working with mojiri-ori like himself. The other weaver have the peruvian incluence and he -KITAMURA have the chinese influence. The japanese government chose him as Living National Treasure as many in Japan believes in the chinese influence.
I think both countries have had there own way of working with the Gauze technique. In China they have been working on jacquard looms and very technical, the material always being silk. In Peru and especially in the Chancay Culture they have been working on the backstrap loom and made the pattern by manipulating the threads by hand. The materials have mostly been cotton which were overtwisted and rarely in wool.
Both ways is to me amazing, as the result have been something that were very special for each country. Today many archaeologists and anthropologists study both countries because both of them have had there own way of developing patterns, yarns, weaving tools ect.
The above textile is woven in Ra-Kin. 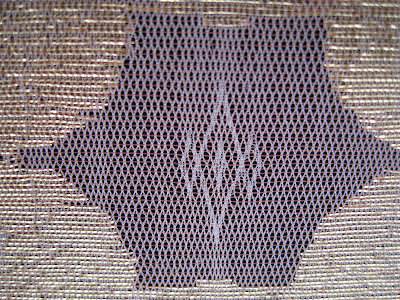 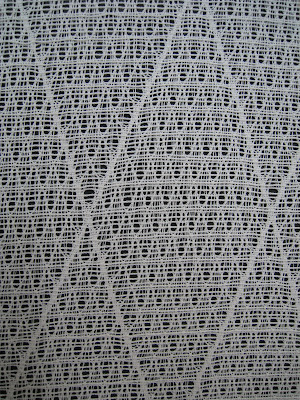 At KITAMURA's studio several women were working for him. Three of them with the mojiri-ori and two others in the warp-patterned brocade technique.
A young woman was sitting and weaving this beautiful textile for an obi. It was woven like everything else in Gauze in silk, but this silk was different. It had a plastic touch, which I can not say for sure where it came from. 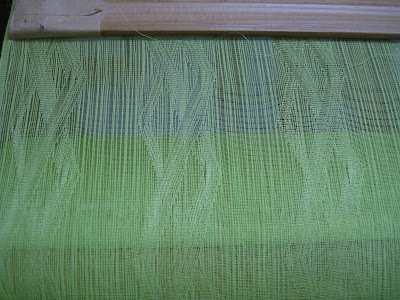 There were many looms in his studio and at a very big jacquard he were weaving this pattern in a very screamy limegreen color, so beautiful. Again in silk. The textile were for a kimono. 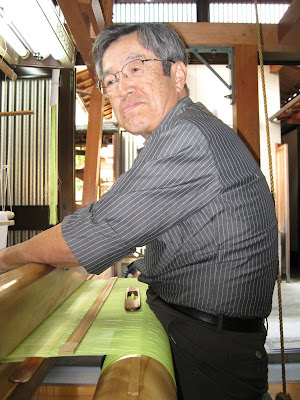 Takeshi KITAMURA sitting at a jacquard loom in his studio in Nishijin, Kyoto.
Please notice the bamboo stick he is using to keep out the textile in the width. 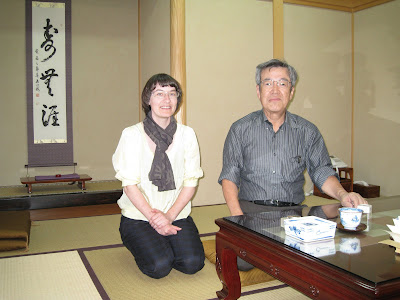 Me and Takeshi KITAMURA.
This visit was like a dream came truth to me. I am wearing a scarf from NUNO, woven in doublecloth and overtwisted yarns. 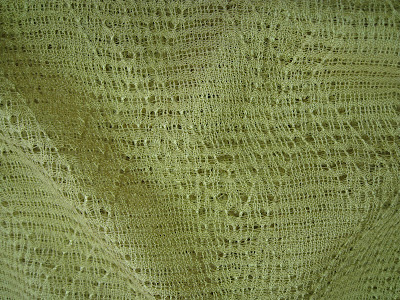 The day before I had to leave Japan Reiko Sudo called me. One of KITAMURA's former student had heard about me and wanted to meet me.
Eriko MATSUDA start working at KITAMURA's studio in 1979, later on she also became one of the weavers he choose for the Usuhata Group.
I visited Eriko MATSUDA in her home in Tokyo.
Today MATSUDA weaves mojiri-ori in a combination of Sha and Ro. The textile above is the first she wove in Gauze after a study to Guatemala. 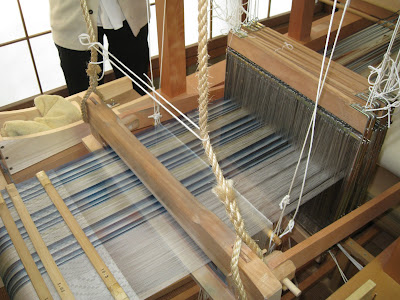 MATSUDA had an ordinary contramarch loom at her home. It had four sets of harnesses on it, but some how she manage to created very complex pattern. On each frame of harness she had an extra frame with heddles and they were in a way connected to each other. Today I still do not understand how she did it.
Here you can see the bamboo stick which is used everywhere in Japan to keep out the textile in the width.
Also note the extra set of halv doups which is below the loom between the reed and the frame of harnesses. These are which gives her the mojiri-ori. 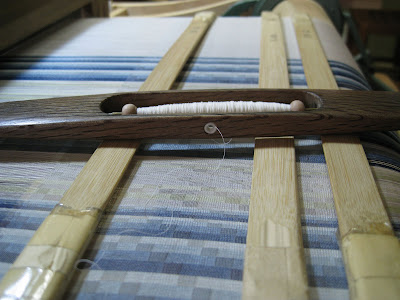 Detail of the loom with the textile.
She were so kind and gave me one of these very thin shuttles and also a piece of the textile. This is hanging next to my KITAMURA piece.
Indsendt af karina nielsen rios, copenhagen, denmark