My new passion next to weaving is embroidery. I have start making it again and also collectiong items, especially white in white embroidery. It's my favorites.
I visited Greve Museum the other day and they have a large collection of Hedebo Cutwork, where white linen thread was embroidered on white linen fabric. So beautiful and with such a detail, both in the stitches as well in the designs.

Also a lot of the photos is of a Knædug which is about 75 cm in width and 100 cm long. The textile is named from the pole, hanging over the oven in the livingroom of the peasants. In Danish this pole is called a "knæ". It was used for drying socks. On holidays and feasts the pole was decorated with the embroided "knædug". 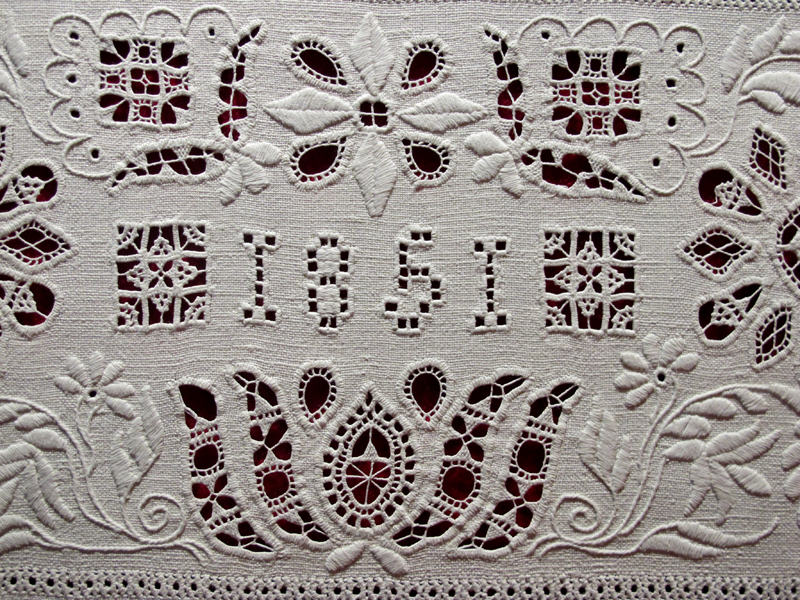 The embroidery techniques used in Hedebo Cutwork have their origins in the oldest form of Hedebo Embroidery, namely the needle lace edgins on collars and cuffs of the peasant shirts from the 18th century.
The embroidery is simple and is made only in Danish buttonhole stitch.
Hedebo Embroidery is not just one form of embroidery but consist of seven different variations;
Hedebo edges, Counted thread work, Drawn thread work, Square cut work, Hvidsøm, Baldyring and Hedebo Cutwork.

On Greve Museum you can find information about Hedebo Cutwork and they have even made a special webpage for Hedebo Cutwork which is in english too. The webpage is fantastic with cultural informations, how to sew and you can even explore Greve Museum’s collection of Hedebo Embroideries. Amazing. 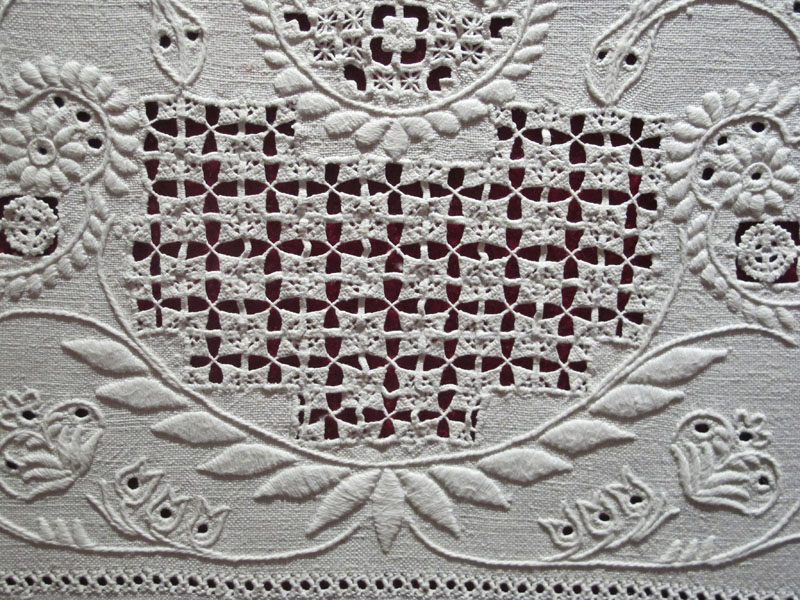 Detail of a decorative towel with Baldyring.
It's a very practised and skilful needlewoman who have made the piece. It's pieces such as this which inspired the architects Thorvald Bindesbøll, Anton Rosen and Martin Nyrop to produce their later designs in Hedebo embroidery. 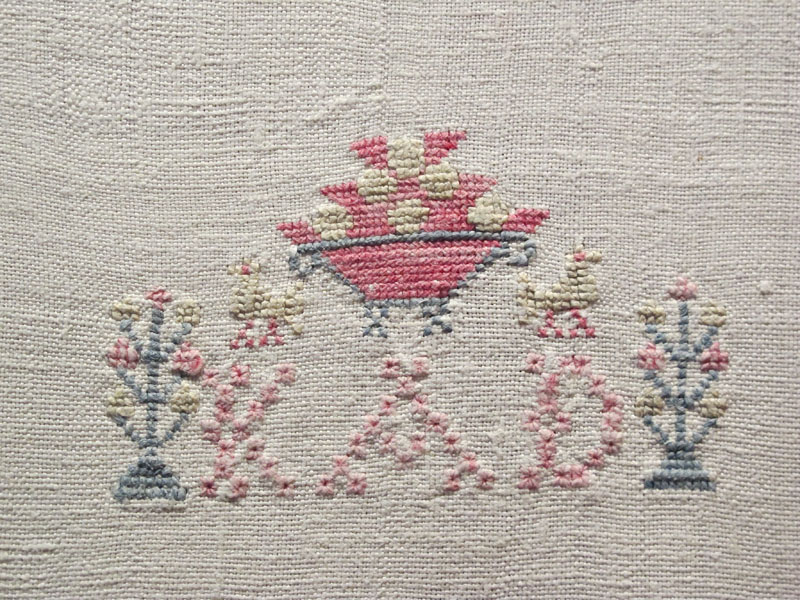 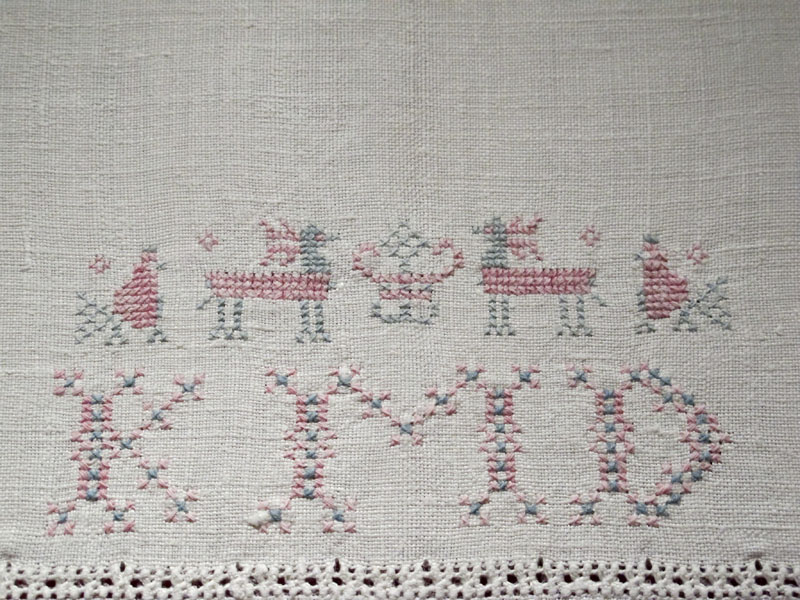 ﻿Detail of a Knædug. Under the cross stitch there is a border of H hemstitching. 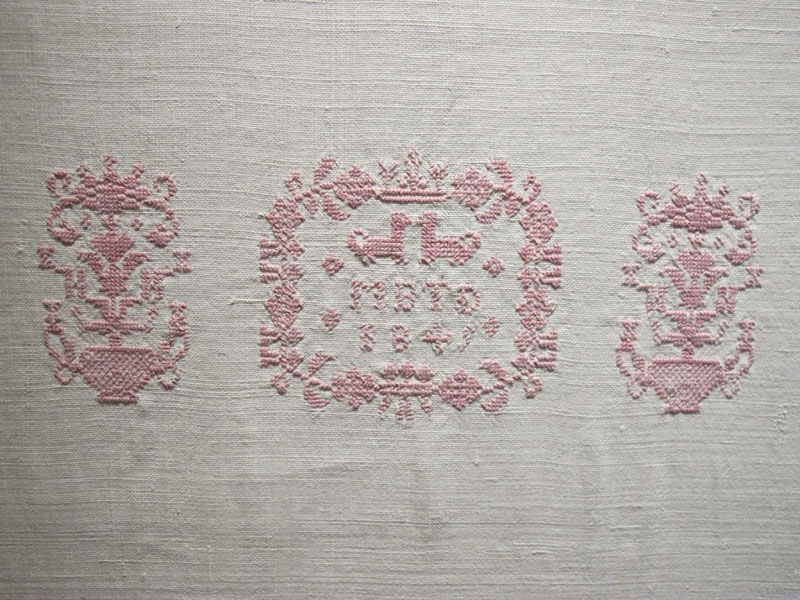 Cross stitch where often combined with Hedebo Cutwork.
Here a detail of a decorative towel, which shows a monogram, with the year surrounded by a wreath, and a flower arrangement on each side. It has been sewn in red cross stitch.
Detail of a Knædug with Hvidsøm and square cut work. This Knædug contains both pure net fillings, rose fillings and woven fillings, as well as fillings of cross-stitching. At the bottom, a plaited warp made of coarser fabric has been attached with small overcasting stitches.
The Knædug is given the date 1834 and the initials KID, embroidered in square cut work and surrounded by vines and leaves in chain stitch and satin stitch. KID stands for Kirsten Jens Datter.
Detail of a bought fringe attached to a knædug. 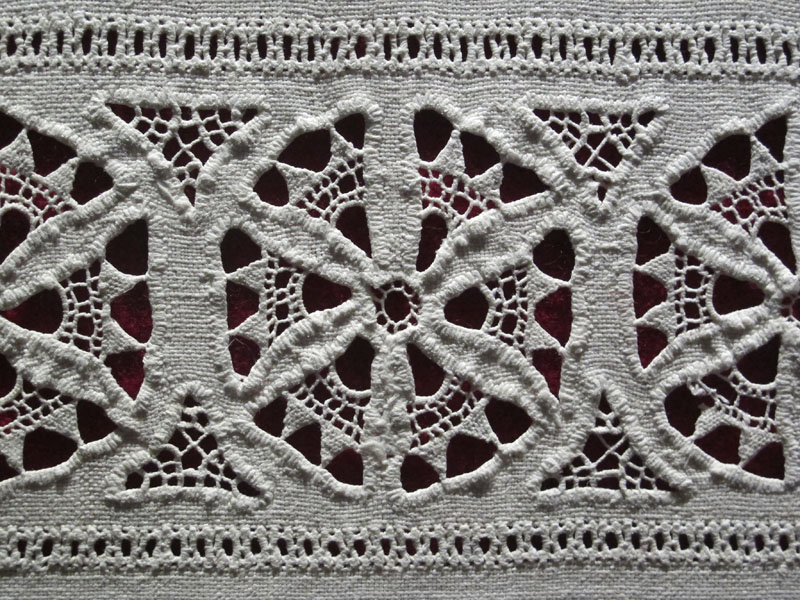 Detail of a cut work Hedebo decorative towel. The embroidery is a fine example of early work Hedebo, where the tradition of having horizontal borders framed with H hemstitching is preserved. Despite the great openness of the stitching, the embroidery is solidly worked and the different fillings in the spaces show a great proficiency and an experienced needlewoman.
Here is the detail of the narrow border with a row of hexagonal wheels, each consisting of triangular spaces with points and beading loops. 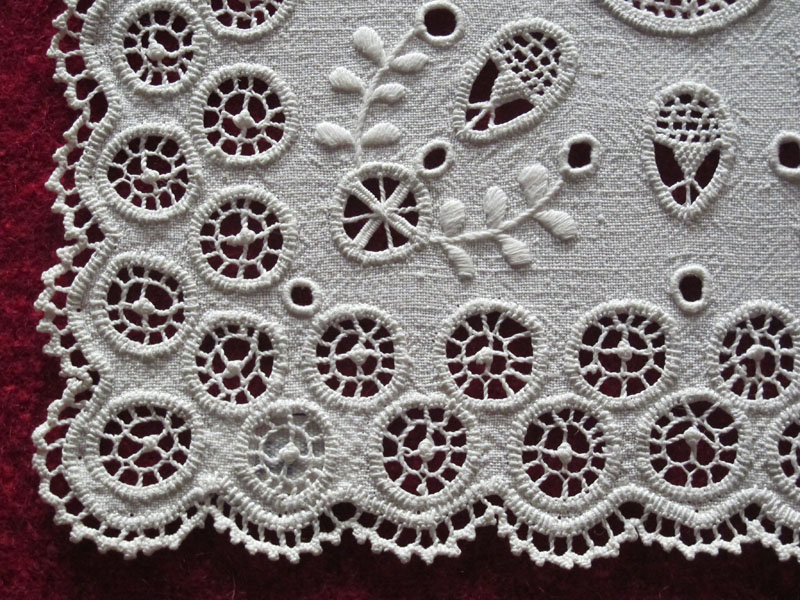 Detail of a corner of a serviette in cut work Hedebo. It's finished with scallops with circular cut spaces in every scallop. Here it's possible to see the Spider Web filling in the holes.

﻿At the Greve Museum there are several books about this amazing embroidery. I recommend these:
Udklipshede, Hedebo Cutwork by Jytte Harboesgaard. ISBN 978-87-988931-3-4
This book is a revised edition of Kniplingssyning fra Hedeboegnen, published by Borgens Forlag 1993. This book comes with ½ of the text in english and shows how the different kinds of stitches and designs are embroidered. Very useful.
Jytte Harboesgaard have her own embroidery webpage and the book is also available as an e-book.
Hedebosyning -en verden af variationer. Hedebo Embroidery -a World of Variations by Henriette Buus. Katalog from Greve Museum 2008. ISBN 978-87-89367-28-6
This book also comes with ½ of the text in english.
Indsendt af karina nielsen rios, copenhagen, denmark